Chiropractic is conservative care, which means it is non­surgical and drugless. In treating low back "slipped discs", most spine experts agree that conservative care should be tried before surgery is considered, except in severe cases.

Chiropractic care has a long history of successfully providing conservative care for disc conditions ­ and no, Chiropractors don't try to "pop a disc back in place".

What is a "Slipped" Disc? 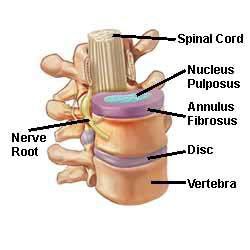 The disc is a circle of cartilage between each vertebra in the spine that acts as both a shock absorber and a shock distributor. If you jump up and down, imagine what would happen to the stack of bony vertebra that make up the spine without the cushioning of the discs. Move your back side to side. Again, you can visualize the give and take of the discs between the vertebrae. Without discs, the spine simply could not function.

Discs don't really "slip". Instead, they bulge, herniate, or rupture. Saying a disc has "slipped" does suggest that something has "slipped out" and is not where it's supposed to be, which is what happens in disc injuries.

Discs are made up of concentric circles or rings of fibrous material with a tough gelatinous center. When cracks or fissures occur in the fibrous rings, the gelatinous material in the center can begin to push out. A number of different factors may cause the disc to "slip".

Does a sneeze cause a "slipped disc"?

The low back "slipped disc" is almost always the result of a process. As is often the case with joint and back injuries, the problem starts small and then builds until it becomes symptomatic. It's a little corny to talk about "the straw that broke the camels back", but it gets the point across.

For example, a patient sneezes and experiences sudden back pain that then proceeds to leg pain. However, the sneeze didn't cause the disc to "slip," but represents the final "straw" in a much longer process. Factors that precede the pain and symptoms of disc injury include disc dehydration, unusual stress on the disc secondary to disturbed mechanics, and too much load on the disc. 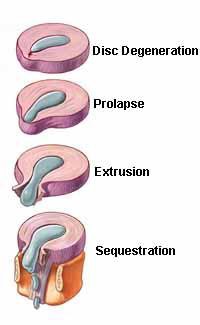 Discs depend on water to keep their height and perform efficiently. When we're young, discs have their own circulation that helps keep them hydrated. As we get older, this circulation ends and the spine must move so that water can be drawn into the discs. If discs become dehydrated and lose their height, they become more vulnerable to cracks and fissures.

Discs are integral parts of our body's mechanical system that allows us to move. Chiropractors are especially interested in seeing how injuries in one part of the body relate to the mechanical system of the body as a whole. Chiropractors look at injuries specifically, but they also try to determine in what way an injury is the outcome of disturbances elsewhere in the body.

The spine functions as a whole, so if we have mechanical disturbances in one part of the spine, even as far away from the low back as the neck, it can influence conditions in another area of the spine. Imbalances in the pelvis, problems in the sacroiliac joints, low back facet fixations, as well as joint restrictions in the midback and the neck, can contribute to the process of disc degeneration and eventual injury.

Disturbed mechanics from lack of muscular support or muscular imbalance are important because discs can come under more stress from weak abdominal muscles, or too much weight around our abdomen. The resulting hyperextension can cause a wedging of the discs.

The opposite condition, hyperflexion, is caused when we round our low back because of weak back muscles or poor sitting habits. This causes stress on the disc in the opposite direction. Finally, if we put too much load on the back over a period of time, or occasionally in one dramatic episode, we can add another significant factor.

A "slipped disc" most often occurs when a number of these and other factors act together to cause disc injury. For example, a middle­aged accountant who sits for long periods, suffers from disc dehydration, and has poor mechanics from weak abdominals, then lifts a heavy piece of furniture and experiences acute low back and leg pain. Or perhaps many months after lifting the piece of furniture, he experiences no pain at all until he sneezes. Bingo. A slipped disc.